Skip to content
Rate this post
I woke up early after a good night sleep. It felt great to be so high in the mountains so I wanted to enjoy some fresh air before the meetings. I packed my stuff and went down to mount the luggage on my bike. In the meantime Jaime called to let me know he is having breakfast. As it turned out the vacation centre’s staff build a tend to accommodate us for breakfast and ensured all Moroccan specialities are available.

After four hours of meeting we were ready to hit the road. We decided to skip lunch with the others and rather grabbed a couple of sandwiches to eat on the road. Our first stop was supposed to be the route of the cedars to spot monkeys on the road. jaime however did not want to spend time on a detour so after reaching Azrou we headed in the direction of El Hajeb.

This turned out to be an unlucky decision. The road quickly deteriorated and we were soon riding on dirt roads and deep gravel. To be honest I did not quite enjoy the change. Knowing that Jaime has extensive off-road experience I didn’t want to disappoint or make him war so I pushed beyond my normal pace sometimes riding at 80-90 kph on deep gravel, which felt quite stressful. In addition the temperature was around 30 degrees which added to the discomfort. After a stop for directions he told me to relax and I realised I just have to enjoy the experience and ride my own rhythm. As of that moment all was great.

After an hour or so of off-road riding we reached the motorway at Meknes and headed towards Rabat. The weather was just great. Cloudless skies and the sun high above us gave made for a good feeling and we enjoyed the hot air.

We stopped for fuel on the way and had a coffee under the shade. It felt like summer. In Rabat we hit the traffic of Friday afternoon so we had to be creative. That meant overtaking from all directions and passing in between car lanes or doing some off-road by the side of the road. We didn’t bother slowing down or using the brakes. It was really hot so standing in the heat and the fumes was not really appealing. Instead we just slalomed around still and moving obstacles. Even at raodblocks we just passed the cars, waved to the policemen and continued straight. It was fun.
As we turned on the motorway towards Casa the air got a bit cooler which felt good – actually the thermometer showed a drop to 26 degrees from 31 in Rabat.
Once entering the peripheral highway in Casa the game was on again. Through long stretches we had to use construction sites and off-road options to avoid standing in the lanes with the cars. We did the fifteen or so kilometers in no time just zigzagging between cars or using any free space available. At one point a Harley rider sticked to our tails and tried to follow us but only managed to do so until we went off the road at a bumpy dirt section to make the best use of the free space provided by a construction site.
Turning off the highway at Hay Hassani we tried to find the best routes possible to avoid traffic. Even there we had to use the pavement on several occasions to overcome stranded traffic. But again policemen just stand by and wave cheerfully as you jump down from the pavement through a red light. It is amazing. We really used every hole or free space to move. It just felt great.
We arrived at Jaime’s place just before 6.30pm. He was kind enough to invite me for a beer.
We just sat there like two kids who had a great time and enjoyed the beer.
Although the day started as a difficult ride once I regained my confidence I really enjoyed the off-road part. Then the whole guerilla riding style with no rules and coupled with great weather made the whole trip feel great. I had a constant smile on my face throughout the day. I can’t describe the feeling but it just felt great. The feeling to ride with a likeminded person who has the same style and vision on the road is just increadible.
Even though I have ridden more beautiful places than the ones we did on that day I will just remember this day as the best ride ever for the reasons mentioned above.

Rate this post Besides the obvious engine guards and skid plates, out bikes are equipped with other protective equipment, either to avoid bigger damage in case of a fall, or to protect some vital parts that are fragile on the motorcycle. We know many riders will go for overkill and put every available protection on… 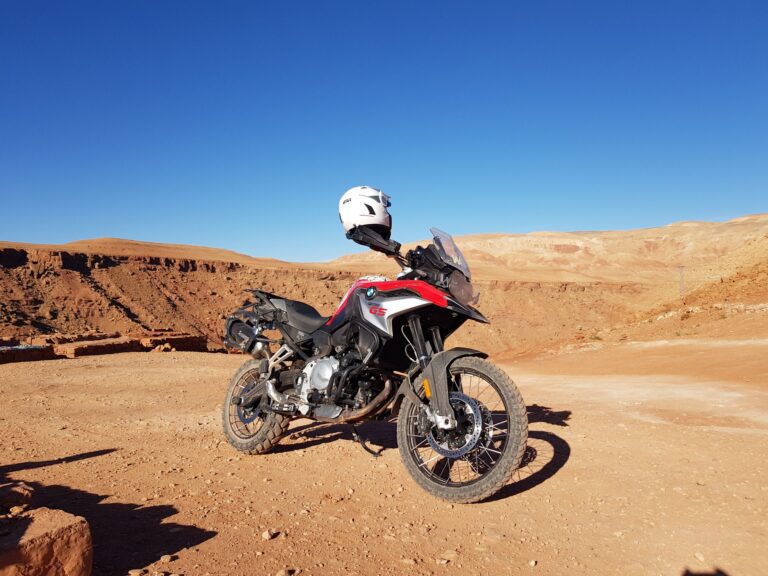 Rate this post As we organise tours in Morocco 10 months out of 12, our fleet and guides cover a rather impressive mileage each year. We ride all kind of terrain, from perfect twisty tarmac roads, through potholed small roads, rocky riverbeds fast gravel tracks to deep sand. We therefore use dual sport tires as…

Rate this post Here is a short video of our four-day trip with Jaime in Morocco. As he is heading back to Spain I tried to cut it so that most of the footage of him is visible. This trip was not a real bike trip since it was more about work but the ride…

Rate this post As my brother-in-law was visiting and it was school holiday, we decided to explore the southern part of Morocco, including the desert. The first day we drove to Marrakech to cut the trip to Ouarzazate in two. We left Casa in the afternoon and spent the night in the Palmeraie part of Kech. After a… 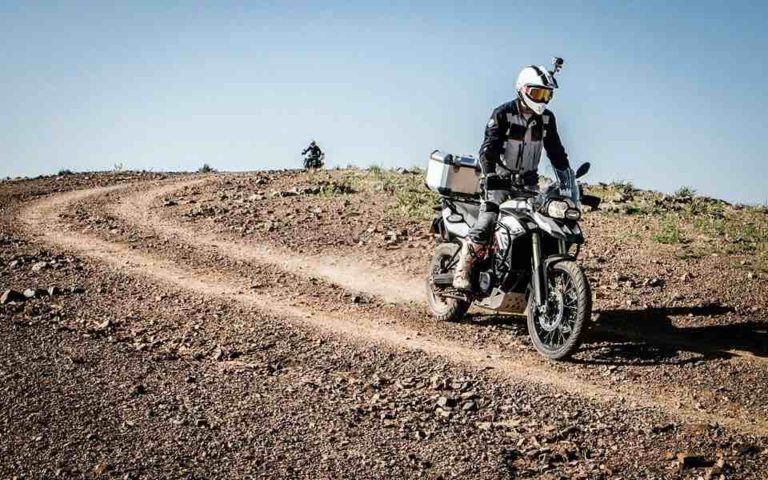 Rate this post It was so easy to fall in love with this amazing place: Morocco. Being a biker for so many years, enjoying every second spent on my bike whether off-road or riding on tarmac, I realised that I would love to stay in Morocco and change my usual business-attire to something more comfortable…

Rate this post For this year’s Morocco winter trip I took the motorbike on a trailer to explore some of the sites we were visiting.  When in Merzouga, we hired a guide as usual to take the family to the dunes and the surrounding sites. I used this opportunity to take the bike and ride…